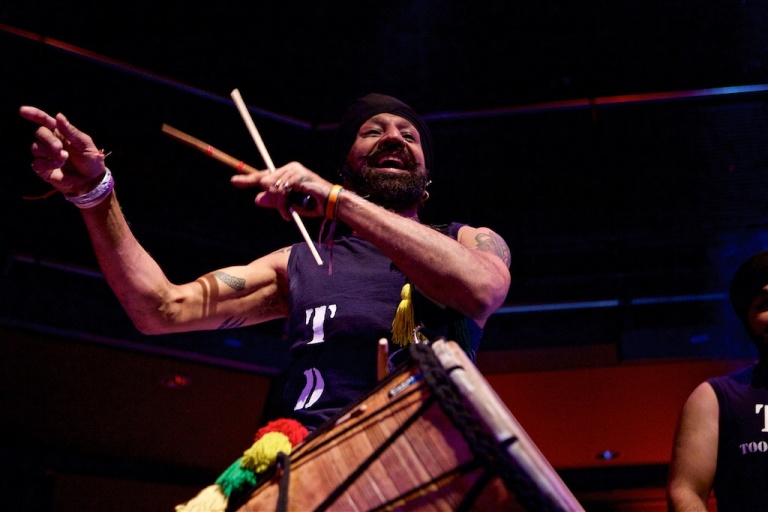 Tonight at the Sage Gateshead, we are getting two phenomenal bands for the price of one. The Dhol Foundation and Afro Celt Sound System. There is a close bond between the two bands even though they are separate entities, with Johnny Kalsi being an integral member of the new revitalised Afro Celt Sound System and being the master drummer and bandleader of the Dhol Foundation.

The first sound is the snare drum. It cuts through the expectant noise of the crowd. The four drummers come out lead by Johnny, all wearing the trademark black clothing with sleeveless tops with TDF in clear white letters. multi-coloured tassels on the drums hanging around their shoulders. There is barely any room on the wide stage for the drummers, guitarist, keyboard, drummer and percussionist.

Johnny is the perfect showman and has an instant rapport with the audience, telling the crowd with a smile that there first attempts at cheering weren’t good enough.

The sound of the first track reminds me of Bob Marley’s Exodus and then the power of the polyrhythmic drums comes in and takes it to another level.

The first number gets the pulses racing. It is impossible not to love the the Dhol Foundation. Their driving energetic beats are perfect for blowing the cobwebs off a hard working day.

Johnny has the whole audience pushing their hands up in time with the beats.

The band are promoting their new album called ‘Basant’ (which means Springtime). The set has a celebratory feel to it. 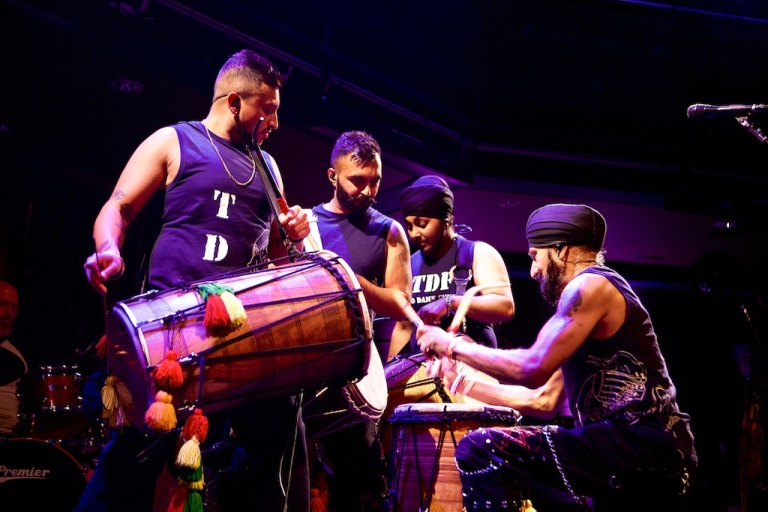 It is only when they play ‘Big Drum Small World’ that I realise how far this band has progressed. ‘Big Drum Small World’ showcases their dance tune background but in terms of complexity, moving the emotions of the audience, the newer tracks are superior and the set is almost entirely the new tracks from ‘Basant’.

The guitarist made his instrument sound like a sitar. The keyboard player was having the time of his life jumping about with his headphones on waving his hands in the air when not playing and their lead vocalist has such a powerful enigmatic  voice, I still heard it when his microphone stopped working briefly..

A question that even Simon Emmerson, the founder of Afro Celt Sound System, asked himself.

He flipped the energy. The Afro Celt Sound System started off  mellow with their seminal track called called ‘Release’.  It’s the first time I notice how young some of the crowd at the front are. ‘Release’ is the he track that has turned the band from original outsiders to the insiders as the track is now part of the GCSE Music syllabus thus bringing in a whole new generation to witness the music.

As usual they have managed to unearth some of the finest musicians on the planet. For this show they’ve enlisted Lottie on flute and pipes. Her timing is spot on.

In Robbie they have found another gem. He’s a percussionist who specialises the bodhran (the irish hand held frame drum). He has infectious energy to match Johnny Kalsi on his solo but neither is a match for the kora player N’faly Kouyate.

After the first number he changes round bowled kora for a slimmer one that sounds rockier. On the jam packed stage he still manages to spin with his multi-coloured coat taking up room. He played the kora around the back of his head. He broke into an Irish jig at one point. Is there anything he can’t do? The next logical step is crowd surfing and with the new generation of fans and bigger venues it might just happen.

Why see the Afro Celt Sound System on this tour?. This is a band revitalised. They have world class musicianship and you will have a great time guaranteed.

Simon points to the front. ‘Are you here because you’re studying us for your GCSE?’ The new generation cheer. They’ve lost their teacher but they don’t care because hteyre having a good time in the mosh pit.

‘you’re the future, never forget that,’ he says.

He tells the audience that he and Johnny had the idea of the two bands touring together twenty years ago and now its finally happened. 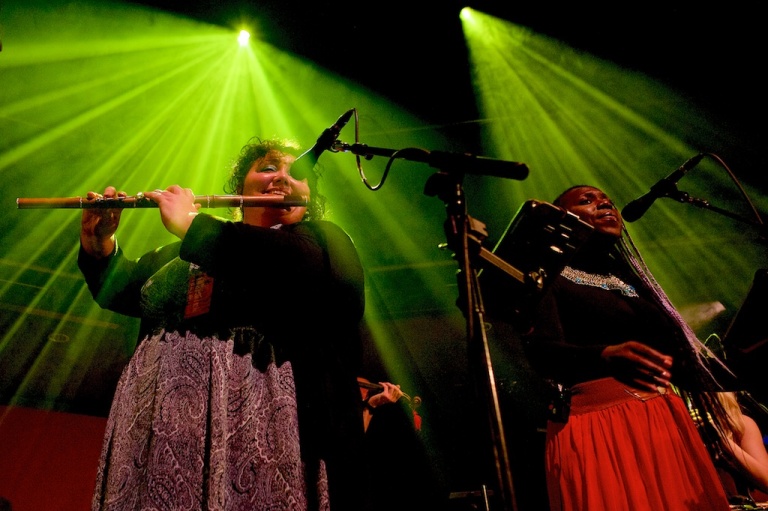 The encore: both bands together. Twenty-five musicians on stage performing two collaborations ‘Mach Seven’ and ‘Desert Billy,’ they then finished with ‘After the Rain’ from the Dhol Foundation’s second album.

No, because they stayed in the foyer chatting to fans of all generations.

Afro Celt Sound System and Dhol Foundation are still on tour. Go and see them.